Increased Text Ad Copy
Pay-per-click (PPC) text search ads still provide the vast majority of Google’s revenue, and they do the day in and day out work of reaching many millions of searchers with the right information at exactly the right time – within real-time user search results.

This year, Google made the big move of removing text ads from the desktop “right rail” – the right side of the page – placing more emphasis on top positions. This move is in alignment with the ever increasing dominance of mobile search (where there is no “right rail”). It also freed up more space for text in top position ads.

Among the more important upgrades, Google will be rolling out the ability to manage completely separate bids for smartphones, desktop/laptop, and tablets. This change has been a priority for the agencies and other ads managers, and will finally be implemented this year. 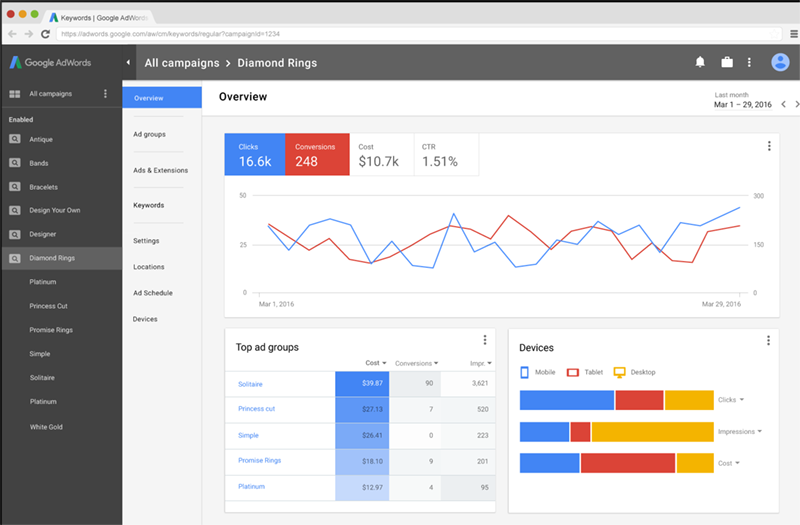 Samantha Lemonnier, Google’s Director of Engineering, AdWords Platform, presented a preview of the new AdWords interface, to be rolled out this year. From the agency perspective, a big improvement is a more visual and graphical interface (see image) that also helps surface important AdWords PPC campaign parameters. I was very relieved to hear that Google won’t be “dumbing down” the interface and taking away some of the fine controls that help create successful campaigns.

One more announcement of note: Google will be strengthening local advertiser presence and opportunities within the very popular and useful Google Maps utility. New “promoted pins” including tap-on advertising lightbox messaging is one example.

Overall, the Performance Summit revealed some terrific new features without some of the smack-your-forehead “I can’t believe they did that,” moments Google has given us in past announcements.

By Fred Zahradnik|May 28th, 2016|Digital Marketing News You Can Use|Comments Off on What the New AdWords Means to Advertisers: 50% More Text, Mobile Breakout Bidding, Better Reporting

About the Author: Fred Zahradnik

Fred Zahradnik is the President, Owner of NetCrafter Solutions.